I posted a picture of DrProject’s database schema a while ago. Last week, I found myself drawing its architecture on the blackboard in class, so I figured I should post that too. (It would have been up two hours ago, but my Mac died again…) 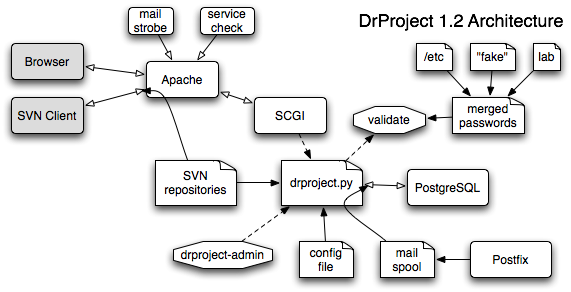 Here are the key elements:

(I left out the Apache and Postfix configuration files, both of which have to be edited as well as part of an installation.)

I have two observations about this diagram:

I’d be interested in seeing pictures of other applications’ architectures if anyone has pointers — I rather suspect that everyone else is making up notations on the fly to fit their needs as well.