Cognitive dissonance (n): voting for someone because they’re going to clean up the city’s finances, then supporting them when they decide to spend $344 million on 61,000 people instead of $111 million on 630,000: 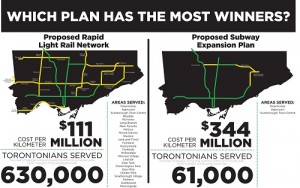 Somebody needs to tell Mayor Ford that Torontonians don’t want a cheap city: they want a good one.