Software Carpentry has 110 PowerPoint files, each containing between 20 and 120 slides—call it 5000 slides in total. I’d like to convert them to HTML5 for use with Slide Drive, the deck.js+audio slideshow tool that David Seifried is building. Here’s the breakdown:

And then there are the diagrams… Roughly a third of the slides have diagrams of some kind, which makes about 1500 in all. That’s too many to redraw, and anyway, I shouldn’t have to: they’re stored in PowerPoint in some kind of vector format, so I should be able to “export as SVG” or the moral equivalent thereof.

But “should” and “can” aren’t the same thing. I can save my PowerPoint in a lot of different raster image formats, but not in a vector format like SVG. However, I can select elements of a diagram, copy them, and then paste them into a vector drawing tool like Inkscape, which indicates that something in Windows understands how to do the required format conversion.

Doing that 1500 times would be very tedious, though. What I really want is a way to automate that process, i.e., save each slide in a deck as a separate SVG that I can later open and edit. Googling turns up a couple of possibilities, but:

Please tell me I missed something…

Later: in response to a suggestion, I downloaded a Windows clipboard viewer and copied a diagram out of PowerPoint. The display looked like this (click the image for full-sized): 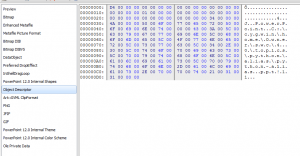 It appears to be a reference into the source file, rather than an actual representation of my boxes, arrows, and text.